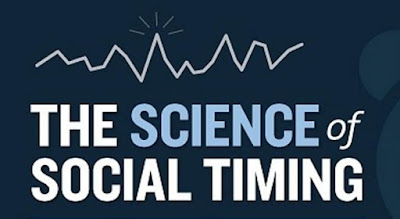 One of the most important social media tricks I’ve learnt over time is to maintain a schedule. Not only will it bring consistency to your work, but will also save you valuable time. But sharing stories according to a schedule itself won’t give you much of an edge, unless you know when exactly to share them. So it’s not just a matter of doing some work; it’s a question of when to do it. Knowing when your audience wakes up and checks Facebook can work wonders for your social reputation.

So the big question of today is, what is the best time to post on social media sites such as Facebook, Twitter, etc? The answer alone depends on a lot many factors, and this is where your social media analytics come in. But before you run off to look at your Facebook Page Insights, here is some advice for some specific social networks.

As I said, social media analytics can help. But it’s not enough to just know when, and how many of your visitors are online. A far better metric would be when the audience is engaging, i.e. clicking, liking, sharing or even emailing stories. This is where insights from some of the largest sharing platforms come in. AddThis, one of the most popular such platforms, can help.

AddThis has compiled a report from more than 14 Million websites that use their tools, and has come up with insights of their own that can help.

This data reflects the peak click and share times for more than 14 Million sites that use AddThis tools. And I must say it somewhat confirms our own observations for Facebook and Twitter accounts for our various sister blogs. 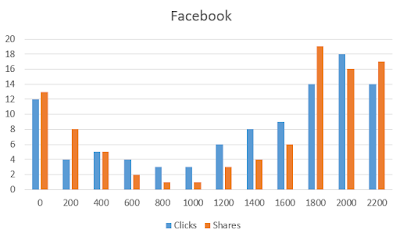 The figure above represents our Facebook user activity (percentage) against hours of the day. This data is based on time in the GMT +5 timezone, whereas the time in the data from AddThis is at GMT -4. But both indicate that most of the activity on Facebook occurs during the night. Very few shares happen during the day (for the India/Pakistan region), but they peak around 6-12 PM. Some clicks and shares also happen during daytime. People usually engage during the starting office hours, and in the evening when they get back home.

According to AddThis, Twitter shares the same trend as Facebook. Both these networks are predominantly used in the day time and evening. But Pinterest is mostly used in the evening and night.

Social media usage apparently depends on the day of the week as well. Here is another insightful observation from AddThis.

Takeaway
Of course your actual target audience might not behave the same way. Maybe you’re running a job board, and people engage with your posts more in the morning. Or maybe you’re all about gaming, and your gaming audience becomes active after midnight. It all depends. But looking at this data, it makes sense to formulate various content strategies based on data from your own account.

For example, you can share stuff in the morning that office-goers can relate to. But keep the best of your content for the evening or night, when most of your audience is engaging. You should also look into what days are most popular for your posts. If you’re posting your content across social networks, maximize engagement by posting on the peak day and time of those networks.

As much as data can be useful, don’t forget to think about the human aspect of sharing. Think about your own behaviors and habits on social networks. When are you most likely to share content and using what social media network? When do you have breaks at work? What social network do you find yourself scrolling through when watching TV at night? Chances are, your audience’s behaviors may not be that far off from yours.