Double Your Twitter Followers in Just 5 Minutes a Day 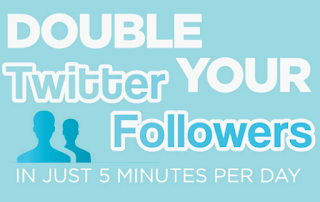 Double Your Twitter Followers in Just Five Minutes a Day

Whether you use it for business, pleasure, or both, Twitter is likely a large part of your social media life. With nearly 695,000,000 users, sending more than half a billion tweets every single day, the Internet’s water cooler is also overflowing with opportunities to attract hordes of new followers ripe for conversion into new customers and fans.

Even if you have a substantial following on Twitter (if you’ve got more than 208, you’re beating the average— although it’s worth remembering that six out of ten Twitter accounts have no followers whatsoever), you can attract more — significantly more — by making just a few simple changes to the way you approach Twitter.

One of the easiest ways to boost your followers is to work with the connections you already have. Twitter’s Find Friends option lets you search your Gmail, Yahoo! Mail, Hotmail, and AOL mail address books for contacts who’ve already signed up for Twitter. You can also manually import contacts, either one at a time or with addresses copied from a .csv (comma-separated values) spreadsheet. For example, LinkedIn allows you to export your contacts to a file in this format with just a few clicks. You can also invite friends who don’t already use Twitter to do so using the same method.

Following contacts with whom you’ve already connected on other sites not only encourages them to follow you back on Twitter, but lets you see who else they follow (along with who else follows them), expanding your pool of potential followers with every person you add.

Adding contacts is a smart start, but the one of the most important aspects of using Twitter lies in how you interact with your followers. You’re far more likely to attract new twitter followers (and build stronger relationships with existing ones) if you converse with, rather than simply broadcast to, them. And providing high-quality content that’s useful and meaningful to your audience (as opposed to endless self-promotion) can make a big difference in gaining retweets and new followers. Adding an image to a tweet doubles the interaction it receives; tweets with links are 86% more likely to be retweeted by others.

Beyond connecting with your followers with content and conversation, remember to keep promoting your Twitter account in other media, use tools such as lists and hashtag searches to track followers (and find new ones) that fall within your target audience, and update your profile frequently to help interested folks find you. With just a little concerted effort, you could be well on your way to doubling your Twitter followers in no time.

Double Your Twitter Followers in Just 5 Minutes Per Day

Twitter is one of the most popular social media platforms with more than 645 million users and 135,000 new users signing up daily. Whether you are trying to get more followers for your business or your personal brand, it’sbetter to have engaged followers instead of just followers. Spend just five minutes each day doing some of the following and you will be on your way to doubling your followers.

Most users will check your profile before they follow you.

Bio
– It is searchable within Twitter, so use the 160 characters you have to show people why they should follow you.
– Take notes from other Twitter bios that you like and write something similar.
– The Washington Post declared Hillary Clinton’s bio the “best bio ever”: “Wife, mom, lawyer, women & kids advocate, FLOAR, FLOTUS, US Senator, SecState, author, dog owner, hair icon, pantsuit aficianado, glass ceiling cracker, TBD… “
– According to Beevolve, “love” is the most frequently used word in Twitter bios.

According to a study conducted by Beevolve:

Those who post on a regular basis tend to have more followers.
– Schedule tweets with tools like HootSuite so that you are consistently posting, even when you are busy. Be careful when using these tools, too many posts or impersonal broadcasts may turn followers away.
– Using hashtags can grow the visibility of your tweets. Don’t overdo the hashtags. You will see 21% more engagement when using one or two hashtags compared to using three or more.

Find connections you already have through email and LinkedIn.

– People are more likely to follow you if you already have a relationship or connection to them.
– Start by following your contacts on Twitter, make sure you get them all with these steps:

Join in on weekly twitter chats, or start your own, and engage with others in your field. You will:

Communicate with your followers:
– Mention them
– Retweet their tweets

Keep your followers engaged by tweeting content that is interesting to your target audience:
– Post product-focused content occasionally, not all the time, and present it in a way that isn’t overly promotional.
– When you aren’t using this type of content, give them something educational or interesting.
– According to Buffer App, tweets including links are 86% more likely to be retweeted.
– Use Google Alerts to stay up to date on topics your target audience is interested in, then tweet about it.

Share photos and video:
– For example, realtors can share tours of a new house and store owners can share photos of their new window display.
– According to Buffer App, tweets that include image links get 2x more engagement than those without.

Learn From the Best

Learn from the largest Twitter publisher in Europe, Anton Perlkvist.

– He attributes his success in part to giving the people what they want, understanding what goes viral and how it goes viral.
– He uses Twitter tools to help him tweet and retweet while he’s sleeping.
– He uses tools like Tweetdeck, Bufferapp and Twitter for iPhone to manage his Twitter accounts.
– Anton manages accounts like @Fun and @GoogleFacts and has over 9 million followers.

Promoting online, in emails and on your site is important, but it is also important to promote offline.

– In your store window: Display a sign in your store window encouraging customers to follow you.
– Business cards: Use a simple customized user name that is easy for others to read and search for online.
– Advertising: Add links or info on your Twitter account to all types of advertising (magazine, newspapers, radio, TV).
– Marketing material: Include your Twitter info on all of your marketing material, including brochures, magazines, posters, media packets and promotional material.
– Events: Include your Twitter info on all promotional materials used at your event, whether it is a poster at your stand or on flyers you are handing out.
– Conversation: When you meet new people, make new connections, have phone calls or meetings, mention your Twitter and encourage them to follow you.