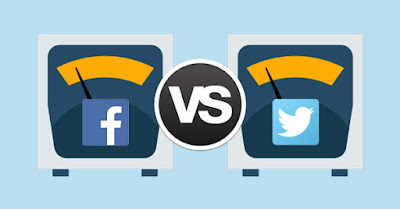 Whenever we talk about social media marketing, it’s always with the big name social networks in mind. There’s the big two of Facebook and Twitter. If you make it the big three, you add Instagram to the mix, though with Google’s recent decision to pull it from YouTube, we might see the network sputter and die within the next few years. If you expand the list from there, it becomes a bit more modular. You want to target a female crowd, you go with Pinterest. If you’re image-heavy, you go with Instagram. If you’re looking for a young liberal demographic, you go for Reddit.

The point is, at the end of the day, it all centers around Facebook and Twitter. If you’re not using them, you shouldn’t even be looking at other platforms.

The thing is, many businesses can’t afford the time and energy required to run them both, at least not right away. Rather than ignore social media entirely, they do the smart thing, and try to pick one to use and grow until they can expand into another, and another, and another.

Which leads us to the decision. Which do you go for first? Facebook, with its billions of users and massive crush of competition in a heavily filtered feed? Or Twitter, with the strict character limit, transitory posts, and limited ability to pay for additional reach?
A Matter of Volume 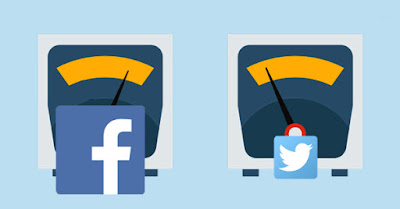 Facebook has more users. No matter how you slice it, in terms of raw numbers, there are more people on Facebook and you can reach more of them with the same amount of effort you use on Twitter. It’s just a fact.

Yes, Twitter doesn’t filter their feed. The thing is, with the character limit, tweets come thick and fast at all hours of the day. If you’re not timing your messages just right, they get lost in the crush just as easily as they would if they were filtered out. You can’t count on an unfiltered feed to save you where Facebook’s algorithm won’t.

I would say that, when used properly, Facebook has the better pay per click system as well. The targeting options, the reach, and the low cost all combine to make it one of the best PPC platforms period. Twitter just doesn’t have the same amount of value and flexibility.

Twitter, though, might just win out in terms of mobile users, specifically if you’re aiming for a younger audience. Though, in many cases, those younger users have left both platforms for something harder to use for marketing, like YikYak or SnapChat. 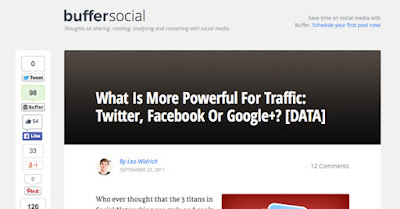 Back in 2011, Kevin Rose, the founder of Digg, did an experiment by posting a link on the big three social networks. After an hour, he had 2,053 clicks from Twitter and 2,203 clicks from Facebook. The numbers are comparable, but the larger pool was not. That’s drawing from 220,000 followers on Facebook, but from a pool of 1.2 million on Twitter. A drastically lower click through rate on Twitter than on Facebook. His check later, after 17 hours, saw Facebook even more firmly in the lead, ahead of Twitter by 3,000 clicks.

Of course, that’s old data. In the four years since that experiment was performed, Facebook has made several moves that hurt business reach, while Twitter has remained largely the same in many ways.

In that experimental link, Buffer does some analysis that might convince you to use Twitter instead. On Facebook, you should only post about once per day, or once every two days. Meanwhile, on Twitter, you should be posting multiple times every day. Assuming that you post around 15 times per day on Twitter, and half of those posts link to your site, the numbers stack up.

Hypothetically, if you were to get 10,000 clicks from a single Facebook post, and only 2,000 for a Twitter post, it might seem like Facebook is the clear winner. If you only post once every two days with Facebook, though, that’s 5,000 clicks per day. On the other hand, if you’re posting your site links 7-8 times per day on Twitter and each one reaches 2,000 clicks, you’re racking up 14,000-16,000 clicks per day from Twitter. It’s a very stark difference.
In the end, I would make these judgments:
Twitter thrives on volume. The more you can use the platform, the better off you’ll be with it. Facebook, on the other hand, would begin to actively filter you under suspicion of spam if you posted too frequently every day.
On Site Metrics 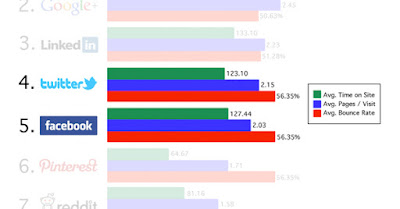 There’s more to social media marketing than just click rate, though. For other statistics, I’m going to turn to a more recent study, performed by Shareaholic last year. Using their client network of 200,000 sites, wit over 250 million tracked unique visitors, they studied how users used sites when referred from various social networks. What they looked at was time spent on site, pages viewed per visit, and bounce rates.
You can see the data at the link above, but I’ll summarize some key points here.
That’s not to say that you should abandon Facebook and Twitter in favor of YouTube. YouTube requires a specific type of content, and if you’re not fully invested in producing that content, you’re not going to work out very well. LinkedIn was also high up on the list, but again, the volume is going to be low compared to the big two.

Other Items of Note
There are a few other things to consider before you decide which platform to use.
For one thing, Facebook is the better of the two for blog comments. You can even use Facebook’s official plugin to merge your Facebook and blog comments into one space. In a world where engagement is increasingly important, this should not be overlooked.
Twitter, meanwhile, is much better as a platform for customer service. Users love to see immediate responses from someone who cares on the site. It’s harder to message someone on Facebook, and it’s more difficult to manage direct and immediate responses. If customer service is a large focus for your company, it might throw Twitter into the spotlight.
Facebook as a primary platform has you competing for the attention of your users, not just with other businesses, but with family and friends. Facebook has even said that family will always take precedence, so it’s just added strong competition you don’t always need.
On the other hand, most people use Twitter as a content discovery platform and news resource. They want to see fresh new content, and keep up to date with current events. They aren’t there for deep interaction, and in fact the platform itself limits it. If you can capture their curiosity, it turns Twitter into a powerhouse.
So, have you made your choice? If you chose both, well, good for you! You have the whole rest of this post to look forward to. If you chose Facebook, continue to the next section. If you prefer Twitter, skip the next section and go to the one after it. You’ll know which one, because it has “Twitter” in the subheading. 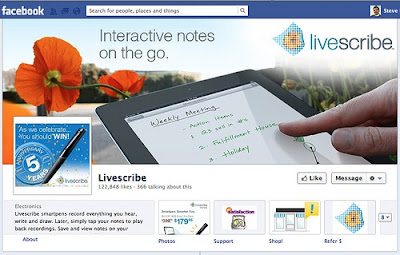 If you’ve chosen to use Facebook for your social marketing, you have to put in a lot of work. It’s a platform with a lot of competition and very limited space. Even though you have hundreds of millions of monthly active users, you won’t be reaching anywhere near that number. You can assume that anyone not part of your audience isn’t going to see your posts unless you pay to reach them. Here are a bunch of tips you can use to grow your audience and make more of the audience you have see your posts.
Facebook is something of a double-edged sword. You can use it and use it well, but it takes time and effort, even if you’re not posting all day every day like you have to with Twitter. If you fail to use it properly, though, it becomes a huge time sink with little to show for it. 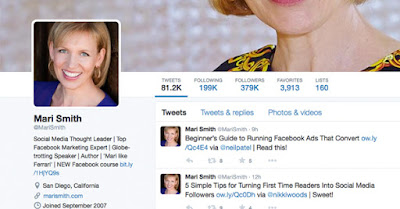 If you’ve chosen to use Twitter for your marketing, you’re going to have to put a lot of time and energy into it. Even though your posts have a strict character limit, you have to think carefully about what to write. There aren’t as many targeting and monetary concerns as there are with Facebook, but you do have to be cognizant of how often you’re posting, who you’re reaching, and how you’re responding.
Here are a bunch of tips for using Twitter properly.
It’s entirely possible to use Twitter to great effect, but it requires posting frequently and avoiding many of the common social gaffes that seem to crop up every year.
Share:
Previous Post