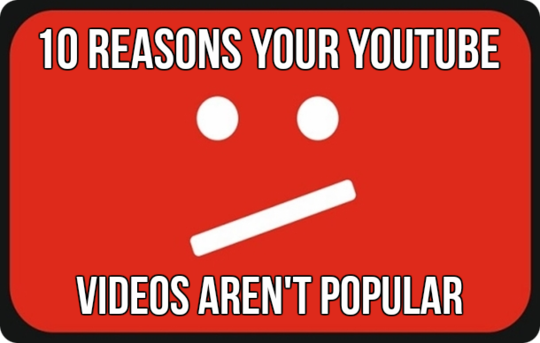 …and Tips for Avoiding These Hurdles.

Out of all of the videos uploaded to YouTube every day, a very small percentage generate more than a few hundred views, and only an elite few of those actually manage to go viral on YouTube and attract views: thousands, millions or, in a few rare cases, billions of views.

Instead of focusing on trying to create viral videos, you should dedicate your efforts to catering specifically to your target audience when writing, producing, shooting and editing videos. The results you’ll then receive in terms of the percentage of appropriate and interested people watching your videos and following through on your video’s call to action will be significantly higher.

These days, when it comes to measuring a successful video on YouTube, it’s not only about the number of views. What’s more important is the quality of the engagement the viewer of your video has.

The quality of engagement is measured based in many ways, such as:

Even if your video has top-notch production value and costs you a fortune to produce, this doesn’t in any way guarantee an audience. There are many reasons why YouTube videos fail to attract an audience.

Some of the more common reasons include:

2 – The content of the video is unoriginal and doesn’t stand out from the competition.

3 – It fails to cater to its target audience.

4 – The content is not entertaining, informative or perceived as containing any type of valuable information – it doesn’t address any type of work or need.

5 – It’s too long and fails to hold the viewer’s attention.

6 – The content doesn’t properly take advantage of the visual aspect of multimedia, so it fails to keep the viewer’s attention. If the viewer wants to just listen to content that doesn’t utilize visuals, he or she could download or stream a podcast or audiobook, or simply turn on the radio. Consider ways to make your videos visually compelling.

7 – The video is given a nondescriptive title and has poorly chosen tags associated with it, which makes it hard or impossible to find using YouTube’s Search feature or a search engine.

8 – The video isn’t properly promoted after it’s published on YouTube.

9 – Early on, the video receives YouTube dislikes, low ratings and negative comments, which indicates to those who stumble upon it later that it’s not worth watching.

10 – The producer or “star” of the video has a negative reputation online, which turns potential viewers off to what the video has to say.

Now that you know some of the more common reasons why many videos published on YouTube fail to attract an audience, you can more easily avoid these pitfalls by taking a different approach when presenting your unique content to your target audience.

Remember, creating videos with top-notch production value and appealing content requires creativity, skill and experience that you’ll probably develop over time. It’s not realistic to expect everything to fall into place perfectly as you’re creating and producing your first few videos. Right from the start, however, make sure your videos will help establish or boost your company’s image or reputation. If you’re not able to achieve a good enough production value to showcase a professional image, seek the help of a professional video production company or upgrade your production equipment.

As you publish your first few videos, take advantage of YouTube Analytics and the comments, likes, ratings and other feedback you receive from your initial viewers. This information can all be extremely useful as you’re getting to know your audience and discovering the types of videos and approaches within your videos that work best.

For a video to become successful on YouTube, it has to offer the right content and approach, that’s targeted to the right audience, within an appropriate time frame, and then it needs to be promoted properly. Many different pre-production, production, post-production and promotional elements need to come together to make this happen.

Jason R. Rich – Author – Thanks for this great article!